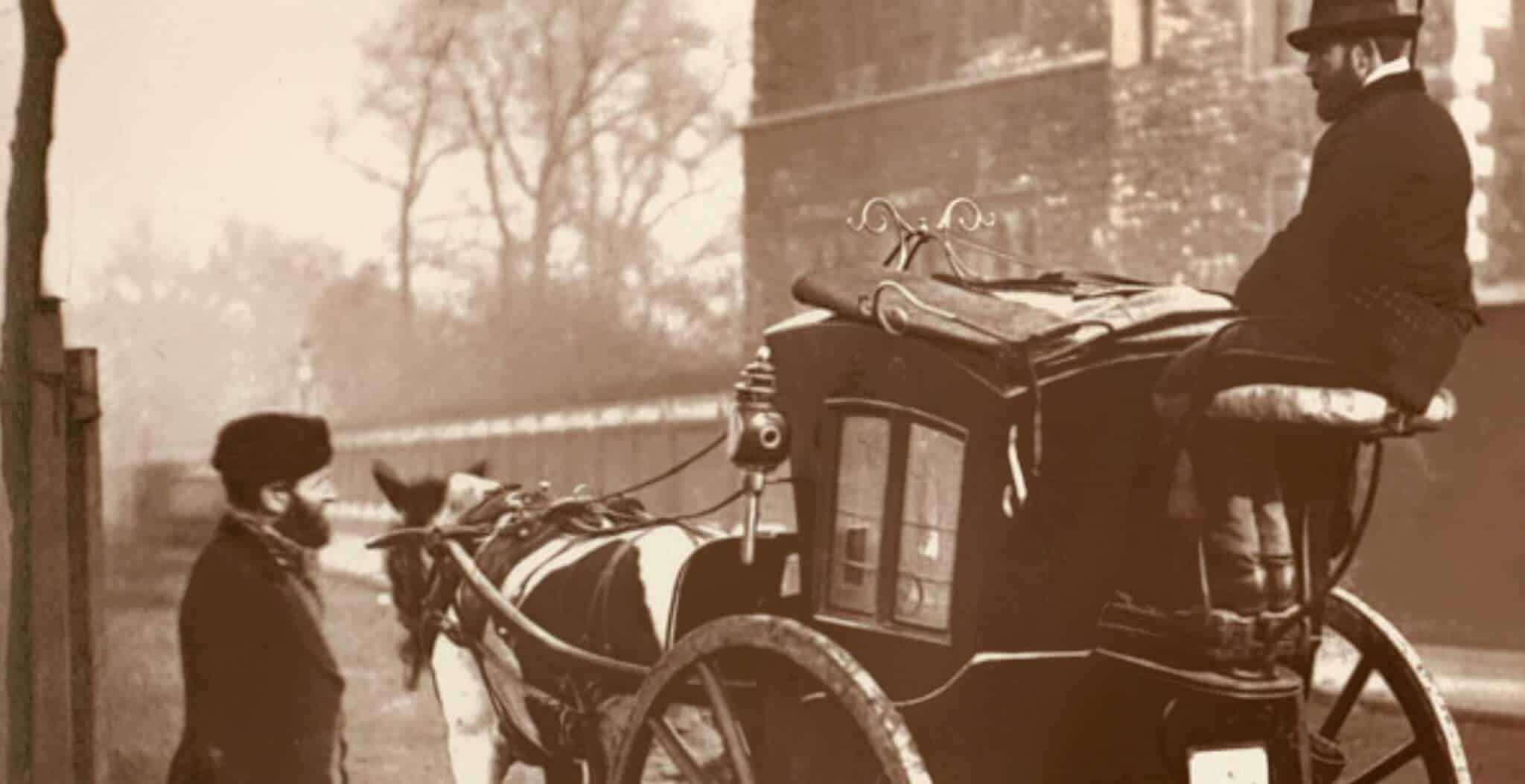 A Brief History of British Taxis

When most people think about England, certain images like the Big Ben, the queen, red phone booths, double-decker buses, and black cabs will undoubtedly spring to mind. The taxi is as much a British phenomenon as afternoon tea or Sunday roast, having driven people from point A to point B since the 17th century.

Millions of people rely on taxis to get around, but where did they come from? Join us on a ride through history as we uncover the complete journey of the taxicab in London.

The first taxi was the simple horse-drawn carriage known as a Hackney Coach. (Of course, Hackney was the area of London notorious for its stables.) The concept was born during the reign of Queen Elizabeth I, when wealthy Londoners struggled to keep up with the costs of maintaining horses, coaches, and drivers, and began to capitalise on their investments by making their coaches available for hire by lesser members of the gentry.

In 1625, there were around 20 Hackney Coaches for hire, operating largely out of inns and hotels. By 1634, a wealthy Londoner by the name of Captain John Bailey came up with a new, more systematic idea which seems so familiar to us now: the taxi rank.

Bailey owned four Hackney carriages, which operated from the Maypole Inn, and charged set tariffs for travel to different areas of London. He began a system for his cabs, making drivers follow certain rules and regulations, and decorating the carriages in eye-catching designs for recognition from customers. This is arguably when taxicabs transformed from a local phenomenon to a much more commercially-minded business.

Hackney carriages remained pretty much identical to how they were first developed for about two centuries, until they saw a significant transformation in 1823. A new, faster carriage with only two wheels arrived from France. Its name came along too, with the French word cabriolet quickly evolving into our still commonly used ‘cab’ and ‘cabbie’.

The French model was adopted in England, most prominently influencing Joseph Aloysius Hansom of York to design and patent the notorious two-wheeled Hansom Cab. The Hansom Cab rapidly gained popularity and began to replace the Hackney Carriage, offering more stability and speed than its predecessor. They could be drawn by one horse alone, improving cost-effectiveness. Another major innovation in the taxi business around this time was the introduction of taximeters, which used mechanical clockwork to measure fares according to distance.

The Hansom cab also offered far more convenience for passengers, with a more protective cab, folding wooden doors to protect passengers from the elements, a roof hatch for communicating with and paying the driver, and a driver’s lever allowing him to open the doors for passengers. Hansom Cabs were very successful and continued to operate in London as well as other cities in the British Empire until the introduction of motor vehicles in the early 1900s.

The Bersey, named after Walter C Bersey, was built in 1897 by the London Electrical Cab Company. It was the first attempt at commercialising electric taxis in the UK. Bersey cabs used traction batteries which were suspended from springs under the vehicle, and could travel up to 12mph. It weighed about 2 tonnes and could cover about 30 miles on a single full charge.

Unfortunately, like most prototypes, the cabs were overly expensive, heavy, and unreliable, leading to several road accidents. The car was known as the ‘Hummingbird’ for the noise it made, but the name was not around for long. The vehicle quickly fell out of favour with taxi drivers and customers, and was abandoned entirely by 1900. Interestingly, electric cabs did not return to London’s streets until last decade (over a century later).

The Introduction of Motors

In 1903, London cabs began to use combustion engines, which were far more reliable than their electric predecessors. The first examples of engine-powered cabs to appear in London included the prominent French Prunel, as well as British models called the Rational, Simplex, and Herald.

In WWI, production of taxis came to a standstill while manufacturers switched to military production for the war effort. It was the 1920’s before London taxis were developed further and new cab designs appeared on the streets. There have been many variations and innovations of the London taxi, but the 1948 Austin FX3 is considered to have inspired the distinct style of current cabs.

Although the Austin FX3 had many rivals, it dominated the streets of London, and so did its new and improved 1958 successor, the FX4. By 1997, London Taxis International developed the TX1 model, followed by the TX2 in 2002. These models saw significantly improved interiors, allowing for far more passenger comfort as well as additions like digital screens. The latest variant, the TX4, will be the last of engine-powered London cabs.

With increasing concern surrounding fossil fuels and emissions, and increasing pressure to innovate, the electric London taxi is making a big comeback. Zero-emissions is the new standard, and taxi manufacturers are keeping up with electric models like the LEVC TX and the Ecotive Metrocab.

More and more vehicles use electric energy rather than petrol around the country and the world, and this includes black cabs as well as taxis. Hopefully, passengers, drivers, and fleet owners alike will continue to drive innovation in more eco-friendly, sustainable transportation solutions. At ABC Taxis Norwich, for example, we are committed to doing our part to make a change thanks to our up-to-date fleet of eco-cars.

Thank you for joining us on a journey through the ages, all the way back to the Elizabethan era when the first Hackney carriages were born, to the electric cars of the future. Happy cabbing!