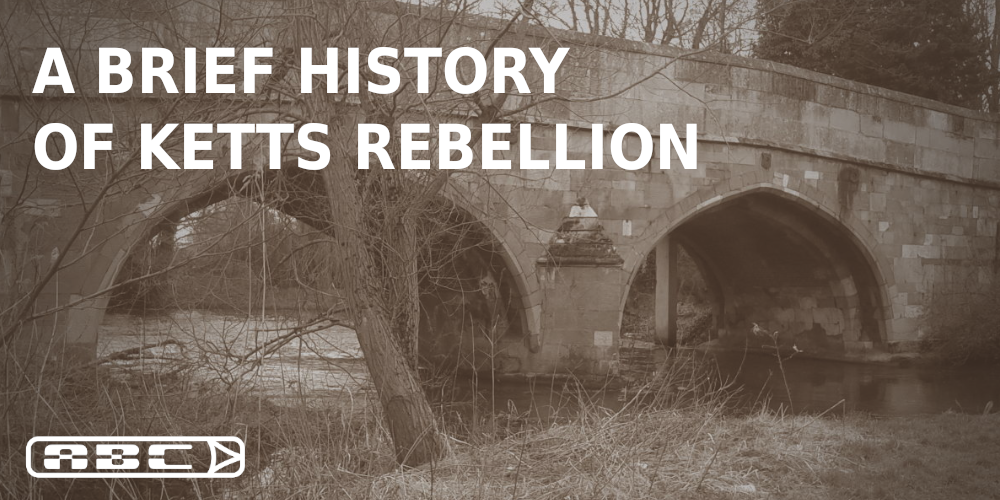 Everything You Need To Know About Ketts Rebellion

In many parts of the country, and in fact, worldwide, remnants of history are not always fully formed, and sometimes even non-existent. Trying to piece the fragments of ancient buildings and the ruins of old battle emplacements together can often just add to the mystery.

It is rare that you will find a coherent and fully formed chain of events, let alone one that you can literally follow yourself – which is why the events that took place in the summer of 1549 stand as one of Norfolk’s most fascinating historical moments.

The story of Kett’s rebellion is rich, too rich in fact to include it all here, although, in the spirit of travelling throughout Norfolk, we did our digging to give you somewhat of a historical tour of Kett’s rebellion, with sites, and stops along the way! Retread the steps of history, from Wymondham all the way to the heart of Norwich, and why not organise a 16th century guided tour with us and our committed and knowledgeable drivers, with our ABC guide to Kett’s Rebellion.

All journeys must begin somewhere, and for Kett and his rebels, it was the Attleborough and Wymondham area. The small village of Attleborough can be found by following the A11 southwest from Norwich, and it was this village in late June 1549 where the first series of fence destructions against Lord John Green was committed, following higher rent fees, and demarcation of public land.

Dating as far back as the Anglo-Saxon period, Attleborough has enough local points of interest to keep any local historian busy – however, we recommend visiting St. Mary’s Church, an ancient church indicative of Norman style architecture, and features rare original wall paintings. These houses of worship, along with Eccles Church and Wilby Church, both located in neighbouring villages, serve as important locations, as these would often be the places of meeting before the start of the uprising.

Wymondham, located before Attleborough, maybe one of the most significant locations at the beginning of the revolution. As the home of the 57-year-old landowner Robert Kett, Wymondham saw the beginning and the end of those fateful months of 1549, as it would be the same location Robert’s brother, William, would be executed, his body hanged from the tower, less than six months later. Becket’s Chapel may be the epicentre of Kett’s involvement in the rebellion – it is now the location of the local library.

On the 7th of July, 1549, in the shadow of Wymondham Abbey, festivities were taking place at the chapel to celebrate Thomas à Becket’s appointment as the Archbishop of Canterbury. The people were merry, the ale was flowing, and Robert Kett was in the middle of it! It wasn’t long however until the discontent of villagers took hold, and soon a group began levelling fences. In the spirit of rebellion, Kett joined in, and even when the band of rebels took down his own fences, he was behind them all the way!

As this leg of the route follows forward along the A11, it is a perfect opportunity to utilise our travel experts and their knowledge of this fascinating part of Norfolk, for booking call 01603 666333.

After the first sparks of rebellion had begun to take place, following smaller bouts of fence-post destruction, and gathering more men at the village at Hingham (north from Attleborough on the B1108), Kett had his eyes on Norwich and began a march towards Mousehold Heath – a position of strategic advantage on the right side of the city. This stretch of his journey is as important as any, and many locations along the way are well worth visiting – the first of which is a tree.

Yes, one of the most important locations of this story is a tree, but not just any old shrub – it’s Kett’s Oak. Located on the B1172, on the way out of Wymondham, and just before Hethersett, this ancient, roped off Oak tree is probably the most symbolic stop on this tour (and symbolic trees, period), as this was the place where Kett gathered his forces and following an impassioned speech, began his great march towards Norwich. Some historians debate whether this tree was the exact tree, yet the story remains the same, and a location very similar to this one was most likely used – so get inspired and definitely take a look.

Travelling through Hethersett, imagine this as the first village an unprecedented rebellion marched through. It was also the home of John Folwerdue, the nemesis of Kett’s story, and a person so unpopular in his community, that his personal dislike of Kett rallied even more rebels. It may be at this point in your travels that you might need to rest. Cringleford Bridge is down the road and from the Parish Church of St. Peter in Cringleford. It is here, following the crossing of the bridge, that Kett and his men began razing more fences – and the word was reaching the city. There is a picnicking spot near the bridge, and this section of the river is often used by kayakers if that sort of thing floats your boat.

Kett might have stayed here, near Eaton woods, and is claimed to have made another rousing speech – “for you who have already stirred, there is no hope but in adventuring boldly!” We have to agree with old Robert on this one, and we aim to provide the best experience for adventuring boldly, organize your next journey with us by calling 01603 666333, or visiting https://www.abctaxisnorwich.co.uk.

We hope you return to continue Kett’s journey with us, expect more exciting adventure guides in the Norfolk and Norwich area, and find some more days out by following our blog, and as always, safe travels!