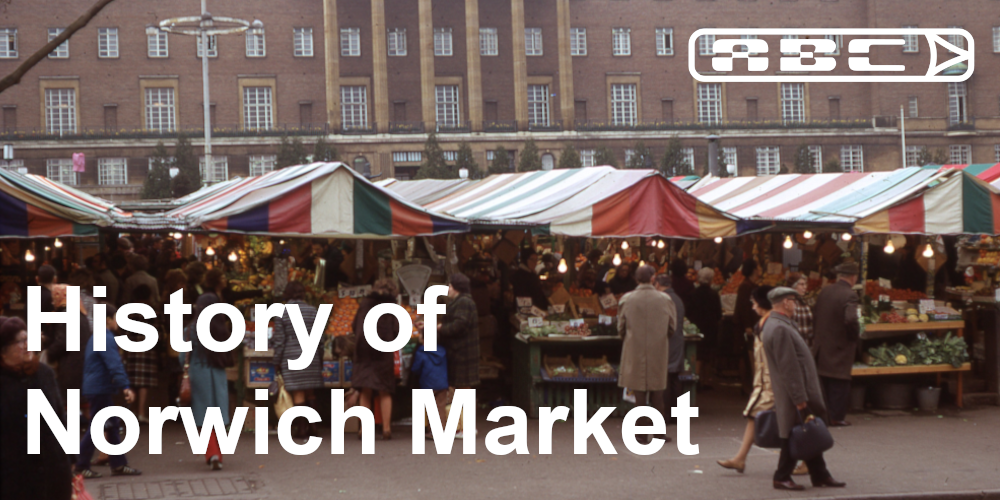 Discover the Secrets of Norwich Market

If you’ve been following our blog for a while, you’ll know that we have a certain affinity for all things ancient – well, there’s a reason for that. Still to this day, Norwich is considered one of the most well preserved medieval cities in the UK, which really puts it in the standings for well-preserved worldwide! We’ve done our fair share of overviews regarding the history and development of our fine city, from the founding of the city by the Normans, all the way to Kett’s Rebellion!

However, one piece of Norwich has managed to exist almost all the way through our city’s lifetime – one part that has seen every era and moment, right in the heart of everything… Norwich Market! As one of the largest markets in Britain, it’s not surprising that its history is rich and full of twists and turns. Selling everything from world cuisine to local produce to vintage books and clothes, our market is a staple in our community, and a must-see stop for any visitors from near or far – let’s see what all the talk is about, and deep dive into the history of Norwich Market!

Harking back to our Medieval guide to Norwich, you may recall the significance of perhaps the most ancient area of our city: Tombland. Before much of what we know of Norwich today existed, the initial Anglo-Saxon settlers under King Æthelstan developed the township as a major trading centre during the 10th century. In fact, the Tomb in Tombland in early English, while often confused for its rather grave meaning is actually the equivalent of Market, making it the ‘Land of the Market’.

This lasted only for these developmental years, and it wasn’t until William I started conquering his way up the country that some real changes began to take place in the city. By the late 1060s construction of Norwich Castle and the Catherdral had begun, with the latter being located immediately next to Tombland.

It’s relatively clear that Norwich’s early market was crucial for its success through the medieval period. While construction on the Cathedral continued along with the Castle, the market of Tombland was sidelined for a new market that was to appear just west of the castle grounds in a new town at Mancroft. Obviously today we can note the significance of this location, as it’s practically exactly where our modern market is to this day, however, little remains regarding the history of the Norman Market, other than the fact it appears in the 1086 Domesday Book.

By the 1300s, things become a little less obscure. Over hundreds of years of trading and development, Norwich had become one of the most significant cities in the UK, let alone in Europe. Our fine city was so significant in fact, that it soon became an inland port! This, combined with the new and booming industries that were appearing across the city (including textiles, metalwork and leathermaking while also being the banking and the governmental epicentre of Norfolk) meant that Norwich was considered the second city of the entire country!

All of the growth that had taken place in the city had naturally reflected itself within the markets. Over this period, Tombland had been waning as the most popular market in Norwich, and soon that title was handed over to the market in Mancroft.

Many of the attributes of Norwich Market we know today are founded in the market of the 14th century – the size and layout of the original market it relatively the same to this day. Extending from Gentleman’s Walks at its eastern border (then known as Nethererowe) all the way to St. Peter’s Street (funnily enough, known as Overerowe).

By 1455, the construction of the church of St. Peter Mancroft had finished, and still remains to this day as effectively the southern border of the market. The relationship between the church and the market is also of note, and while we haven’t been able to confirm it yet, for a very long time every stall holder of Norwich Market maintained the right to be married in the church and be buried in the churchyard, which we thought was quite interesting!

At that time, markets were far more functional than they are now and within this section of the market, you would have found everything from ironmongers to fish mongers, blacksmiths to butchers and everything in between! Where the passageway on the south side of St. Peter Mancrofts is (you may know it as where the Tunnel of Light is erected each Christmas season) there was an additional livestock market, dealing in wheat, poultry, cattle and sheep!

More than a Marketplace

For a couple of hundred years, Norwich Market moved steadily forward. Miraculously surviving and then recovering from the impacts of the bubonic plague of 1348, few changes were made to the overall marketplace. In the 1400s, the tollhouse at the north of the market was demolished, and erected in its place was Guildhall, almost exactly the way it looks now.

This would not be the only demolition of the original parts of Norwich Market. In the early years of the 1500s, Mayor John Rightwise would demolish the original market cross (a medieval structure that was erected to prove the market was granted by a monarch, a bishop or a baron), and build a new octagonal one, fitted with an oratory with a priest inside – must have been a squeeze!

The ‘new’ market tower stood firmly until the English Reformation of the 1530s, where much of its overtly religious architectural additions were removed, as per the wishes of Henry VIII. In 1549, the octagonal plinth was used to accommodate gallows, used for the execution of Kett’s Rebels following his eponymous rebellion.

The market tower was demolished in the mid-1700s, but the outline of its octagonal base is outlined on the ground in red stones, can you find it?

And We’ve Only Just Begun!

It’s becoming a little bit of a theme of our local history adventures on our blog! With a city as old as ours, it’s not surprising that we can’t fit the whole story in one neat package (and include everything we think is worth knowing)! The one thing it does mean is that we can have a whole new post just to fill in the gaps, and give our historic market’s story the attention it deserves!

If you’ve leant anything new, or want to discover something for yourself, why not take a trip to Norwich Market yourself? Book yourself an ABC Taxi, and relive history, one stall at a time – and don’t worry about the shopping, all our taxis are large enough to accommodate any nick-nacks you can’t help but pick up! Download our ABC App, book online or call 01603 666333 to find a taxi fast.